Arianna Huffington: How to succeed? Get more sleep

In this short talk, Arianna Huffington shares a small idea that can awaken much bigger ones: the power of a good night's sleep. Instead of bragging about our sleep deficits, she urges us to shut our eyes and see the big picture: We can sleep our way to increased productivity and happiness — and smarter decision-making. 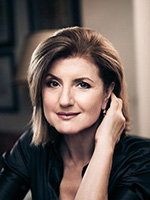 She was born on July 15, 1950 in Athens, Greece. At the age of 16 she moved to the United Kingdom and studied economics at Girton College, Cambridge. Later on she became the first foreign and third female President of Cambridge Union. Arianna has plenty of accomplishments. They include the writing of several books, music, articles and a variety TV Special (which earned her an Emmy award nomination), the co-founding of the popular Huffington Post and a candidature for governor in the state of California. She has also worked as an actress on hit TV shows such as How I Met Your Mother, The L Word, Help me Help you and the film EdTV. Arianna worked as the president and editor-in-chief of The Huffington Post Media Group from 2011 to August 2016. Right now she’s working with a new startup called Thrive Global, which focuses on health and wellness information.